October 31, 1991, was the snowiest Halloween Day ever recorded in the Twin Cities area. People had no business driving that day. 22 people were killed, and over 100 injured.
My mother was one of them.
She was delivering hot meals to the elders in need, because hunger doesn’t take a break.
She was just that kind of a person, always thinking about others before herself. She didn’t have to try. It was simply who she was.
She was heavily involved with voluntary work in the area, putting in many hours for different organizations. There was either glory or recognition in that, but the joy from within, was enough.
Our family was a caretaker for the Hay Lake School and Erickson Log Home Museum, Scandia, right across the street from our house.
Memorial benches, dedicated to our mother, was erected between two buildings shortly after her death, by friends and family. She touched many around her, way more than she realized.
After more than 25 years of harsh Minnesota winters, it was time for a makeover – new beams! With a little maintenance, they should be good for another 25 easily!
We all die, but we really don’t. We raise our children to be better and bigger than ourselves. She has not succeeded yet, but she will. She will..

We dropped Joseph off at St. Mary’s University, Winona, MN, yesterday. We gave him a typical parent speech – study hard, don’t get hooked on energy drinks, hang out with good kids, cut back on video games, etc.
He didn’t have the best or the latest toys when he was growing up in four different countries, but he understands that humanity is about community, not things. The college should simply be an extension of what he learned.
We have high hopes for him – to learn, to grow, to make a difference.
Go, stride with zeal, Joseph!

It’s our last week here in Minnesota.
The kids and I swung by my childhood hometown, Scandia, today. Meister’s Bar and Grill was still there, serving great burgers just as always. They added a few more items to the menu since, including this giant burger loaded with TWO pounds certified Hereford beef burger, a bunch of melted American cheese, fried cheese curds and onion rings.
None of us tried to eat it within 30 minutes for a free t-shirt. We just split it 3-ways and filled ourselves with enough protein for the next couple of days! 🙂

Whenever we visit my brother Peter at Forest Lake, where we attended high school, he yanks Joseph and Jonathan away from their laptops and brings them to great Minnesota outdoors. Yesterday was no exception. Here we are at Carlos Avery Wildlife Management Area, Stacy, just north of Forest Lake. It’s over 20,000 acres of outdoor heaven! 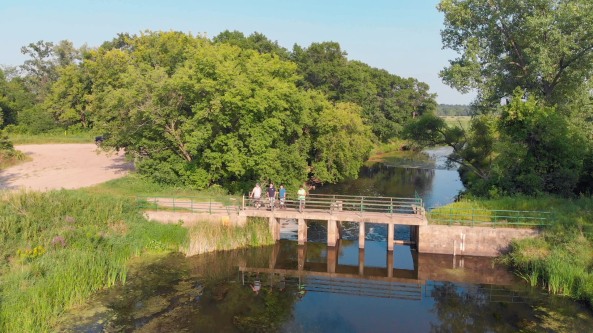 We are now back in Minnesota! We didn’t want Iowa to feel left out, so we stopped at an Amish town on the way here. Ever so curious, I asked one of the store attendants how some types of furniture were made without power tools. The answer was surprising – they cannot use electrical tools, but they DO use pneumatic tools, powered by compressed air generated by diesel engines! I found it somewhat confusing and wondered how these cows were welded.

I am editing some pictures in the back of the International Prayer House. I feel lifted and inspired. It probably has something to do with the place and the worship music performed by musicians 24-hours a day.
I came across this image while sorting through some pictures from last week. It brought back some intense feelings when I visited The Canyonlands and Arches National Park a long time ago. This is a piece I wrote in 2008 when one of the most famous Arches collapsed.
—-
I read in the news that the Wall Arch fell today due to inevitable force of nature – wind and erosion. I don’t exactly know why, but my chest felt heavy, as if a friend died.
I’ve been to Canyonlands Parks twice while I was in college. The first trip was with an organized school group; and the second, the year after, with friends, which I remember more. Five of us stuffed ourselves in Jack’s Buick, fully loaded with five Jansport backpacks and enough supplies for a week.
The drive was long and the cabin felt crowded, but the anticipation of sleeping under the stars without a tent, exposing ourselves to the pure elements excited us, enough for me to ignore the childish jabs by Steve and Dan whenever I started dozing off. Jack drove the whole way without a break, other than for gas. We saw hundreds of mule deer along the road, with their nocturnal eyes shining like the sparking fireflies at hot humid Minnesota nights.
I remember a particular afternoon in the park. While everybody was off exploring, I studied a piece of blue paper. After a few minutes, I began to see an intricate pattern of paper fiber, meaningfully interweaved in a delicate fashion. I was convinced that a person at a paper factory spent hours, if not days, creating that particular pattern, trying to have someone really see it for what it is, having it appreciated. He wanted to communicate to others that it’s special, that extraordinary things can be found in an ordinary piece of paper. At that moment, everything made sense – that everyone in the world is struggling to be understood, to be appreciated, to connect and to be connected. It was a turning point in my life. I would never look at another person in the same old manner. I understood that everyone was unique, but we want to belong and be understood. Nothing we do is meaningless. We all want and need to be connected, to love and to be loved. Blue pieces of paper – whenever I look at them, I think of that Spring break of 1987 in Utah. I remember the intense sun during the day and the cold desert night on my face, looking up at the satellite screaming across the sky, dodging between the stars. And of course, I remember the meaningless piece of blue paper, and how it changed me.
My heart is heavy when I look at the picture of the Wall Arch that no longer exists. Perhaps I know that my carefree youth ended a long time ago, or simply know that everything must come to an end, that nothing lasts forever.

We are staying with Sonnie’s sister who resides in the International House of Prayer campus, Kansas City, Missouri. We’ll be here for a few more days. The Hernandez, a missionary family we have known for a couple of years, stopped by on their way to Minnesota. We had a wonderful time BBQ’ing and sharing travel stories.  Yup, they have a large family – eights kids in all! 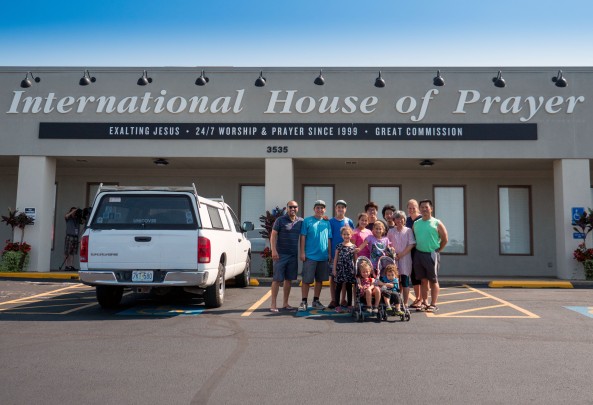