The landlord of the school property used have four puppies, but they all died of some horrible disease.  A few months later, however, 4 more puppies strayed into his yard from somewhere.

They remind me of my first dog.
I grew up in Korea with four sisters.
We had a dog named Happy.
It was customary at the time, to give dogs English names.
Happy was very happy when she had five puppies; four white females,one black male.
Naturally, the black one was mine.  I named him Puppy.
All puppies and Happy were very happy, until one cold rainy day.
All puppies, other than Puppy, drowned.
Happy was no longer happy. She stopped eating afterwards. She then died,probably of a broken heart.
Puppy grew, but wild.
He growled, barked and bit.
We loved him, but it wasn’t enough.
He was put down. 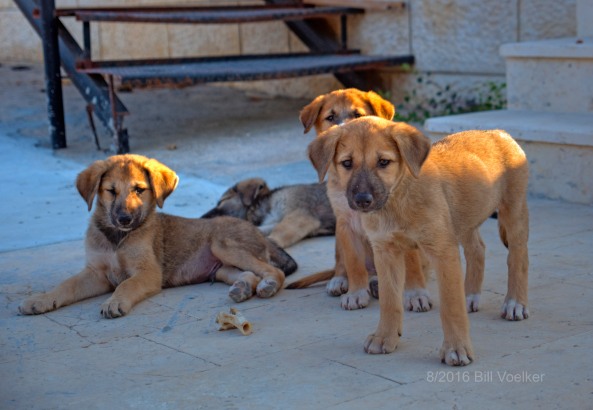 We trained our chickens to go up to the coop on the first day by showing them how to walk up the steps. They got a hang of it after a couple of nights. This is the ritual they go through every evening.
On a technical note, it was getting dim, so I cranked up the ISO to 800, set the shutter speed at 1/50 in a shutter priority mode. It turned out like it was taken at daylight!